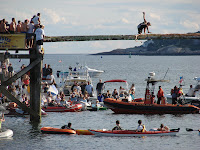 There's still time to experience Gloucester's Saint Peter's Feast and catch the world-famous greasy pole contest -- and the weather is expect to make this the best of the four-day celebration in downtown Gloucester. Despite the sometimes wet and cloudy weather, the Feast has entertained us with music at the bandstand, food and amusement rides at the carnival, and the boat races and greasy pole challenges that lead to today's final championship contest. You can check out a schedule of events here -- and the new Fiesta webcam -- but we can tell you there will be even more of what we've seen the past few days plus the Blessing of the Fleet, religious services and the procession through the streets of Gloucester. And if you'd like to grab some time on the beach, the weather should cooperate for you as well today. The Feast goes late into the night, and when you're done you can come rest up at the Blue Shutters. We still have rooms for tonite -- and by the way, tomorrow and Tuesday promise to be great beach days!
Posted by Blue Shutters at 4:28 AM No comments:

A few weeks ago, we did a post here on the Jimmy Buffett song "Boat Drinks" and mentioned that it fit the mood at the time. Jimmy wrote about wishing for warm weather (and a margaratia or similar "boat drink") during a mid-winter gig in Boston many years ago. He even made a hockey reference, with the "visitors scoring on the home rink." At the time we posted a clip to that song, we were laboring through a cold wet spell in early June -- and the Bruins had just lost to the Canucks in the Stanley Cup Finals. Last night, a few of us saw Buffett in concert (that's the entire group in the photo here), and he sang the very same song -- with new lyrics and a new meaning. Check out this clip (song # 6). It was a celebration of the Bruins championship...and of the 80 degree temperatures that gave the day a summer-like feel. When we wrote about "Boat Drinks" earlier this month, we said warmer days were ahead -- we were right, as evidenced by this weekend's weather at Good Harbor Beach (if you still have a chance, come out and see for yourself). And while we didn't predict the Bruins victory -- but we were sure hoping for it!
Posted by Blue Shutters at 8:51 AM No comments: 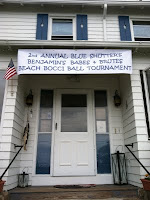 Our last post focused on a group with deep roots into Gloucester's seafaring history, and here we're spotlighting guests who are making a new kind of history, focused on another side -- the "beachside" -- of our region. This weekend, we're playing host to the "2nd Annual Blue Shutters Benjamin Babes & Brutes Beach Bocci Ball Tournament." The Benjamin family has a special connection with the Blue Shutters -- Mom and Dad treated their daughter and her fiance to a stay at the Shutters a few years back, and the young couple returned shortly after they married and later after having each of their two kids. Mom and Dad have also arranged to have their son, a Navy officer (back to the seafaring roots), stay with us. Last year, they encouraged friends to use the Blue Shutters as their base of operations for a bocci ball tournament. And in 2011, they turned it up a notch or two -- there are even more contestants, and we're sure there'll be even more fun. So in just a few days, the Blue Shutters has experienced a piece of Gloucester's legendary seafaring history and played a part in adding to the region's reputation for beaschside fun. We're a pretty lucky bunch!
Posted by Blue Shutters at 1:58 PM No comments:

A Bit of Gloucester History at the Blue Shutters

The four of us took over the Blue Shutters in early 2007, but it feels like we've been here forever. Our roots may have been down 128 a few exits -- in Burlington, Woburn and Stoneham -- but Gloucester has always part of lives. It's where we came on a summer Saturday for a few hours of Good Harbor Beach fun, on a Friday night for some dancing at Little Earls and on a Sunday afternoon for dinner out with Mom and Dad.

But our Gloucester history seems insignificant when compared with the group staying here at the Blue Shutters this week. It's a gathering of the direct descendants of Capt. Elias Davis and James Mansfield, described by one of the organizers --Rev. Graham M. Patterson --as "late 18th and 19th century contemporaries who figure prominently in Gloucester's seafaring history."

Graham is here to host a memorial gathering for his mother, Marion Mansfield, who he describes as "the last of her generation of Mansfields." According to Graham, their "forbearer James Mansfield (1765-1842) established a ship's chandlery on Front Street in 1792. From there he built one of the largest fleets of fishing schooners in mid-19th century Gloucester. On the 1852 Walling Map, the Mansfield Wharf is the largest on the western end of the harbor. He built a four-story, double Federal house at No. 26 and No. 28 Front Street in 1832, the year my great-great grandmother Abigail Somes Davis married Alfred Mansfield, Sr."

He goes on to talk about his great-great grandmother Abigail Somes Davis Mansfield (1811-1900), who "befriended Fitz Lane (1804-1865) from the days of her childhood, purchased his paintings, and left them to my cousin Alfred Mansfield Brooks." Graham tells us that one of his ancestors owned the California, which is featured in one of Fitz Henry Lane's most celebrated paintings at the Cape Ann Museum. A great uncle left the museum a cache of Fitz Henry Lane drawings in the 1940s, and since the very opening of the Cape Ann Museum, some of the many Mansfield family fine arts objects donated to the Cape Ann Museum have been housed there.

Nearly a dozen Mansfield cousins -- from Paris, Illinois, Pennsylvania, Maryland, New Jersey, New Hampshire and here in Massachusetts -- are attending this reunion, touring both the Cape Ann Museum and Cape Ann itself with Linn Parisi, serving as tour guide, following the journal entries of Graham's grandmother, Adelaide Mansfield, which she made during her trips to Gloucester between 1915 and 1948.

We feel very fortunate to have this group with us this week -- while we hope we're contributing to Gloucester's future with our work here at the Blue Shutters, we also think it's important to celebrate the unique history of this city and surrounding towns. And you can't get much historical than this Mansfield clan. We hope you agree -- if you do, give this group a wave if you see them on the streets of Cape Ann these next few days.
Posted by Blue Shutters at 3:23 AM No comments:

Submit a Review or Comment on Your Stay -- You May Win a Gift Card for a Return Visit!

This summer, we're starting an effort aimed at encouraging you to share comments and reviews -- with online sites like Trip Advisor and Yelp, on our website "What's New" page, or in the guest comments book in our main room. Every three months -- at the end of the summer, fall, winter and spring -- we'll gather up all these reviews, select one at random and present that person with a $50 gift card that can be used toward a return visit. If you do post comments or a review, let us know about it -- that way you're sure to be in the running for that gift card.
Posted by Blue Shutters at 5:07 PM No comments:

Author of Cape Ann Knitting Mysteries (and a Friend of the Blue Shutters) Visits Gloucester...and Gives Us a Shout-Out!

Friend of the Blue Shutters Sally Goldenbaum -- author of the Cape Ann knitting mysteries on display in our main room -- was in the area this week, visiting from Kansas. You can see her talking about her newest Gloucester-inspired book, The Wedding Shawl, on Good Morning Gloucester (GMG). Listen for the shout-out Sally and Joey from GMG give the Blue Shutters!
Posted by Blue Shutters at 7:17 PM No comments:

A Song about a Soggy Weekend...and Longing for Sun on Good Harbor Beach 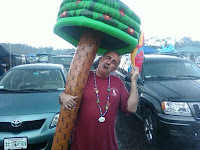 One of our earliest posts is about a favorite Jimmy Buffett song -- One Particular Harbor. We thought the lyrics about this magical piece of the ocean reminded us of the Good Harbor Beach and the Blue Shutters. Today, another Buffett song came to mind as we watched a cold rain sweep across the beach -- and as we lament last night's Bruins loss. Listen to Boat Drinks and see if you agree -- if you're like us, you'll agree with the song's longing for warmer weather on a sandy beach. The good news is, it's not too far off...and right outside our door. Speaking of Jimmy Buffett, he's coming to the Boston area next weekend and some of us will be there, maybe singing along to "One Particular Harbor and "Boat Drinks" (that's one of the innkeepers at a Buffett concert a few years back).
Posted by Blue Shutters at 5:50 PM No comments:

We see all kinds of folks pass through the Blue Shutters -- old and young, locals and travelers from all parts of the world. We've had families and students, retirees and businesspeople. This weekend, we have visitors from Virgina and Connecticut, two groups from Fitchburg and a couple up from Boston. One of these guests introduced us to his band, Moniker. We just checked out their website -- you should too. It's just one example of the interesting people you'll find at the Blue Shutters.
Posted by Blue Shutters at 5:36 PM No comments: